We are currently 100% privately funded by your donations!

You can help us support our mission here 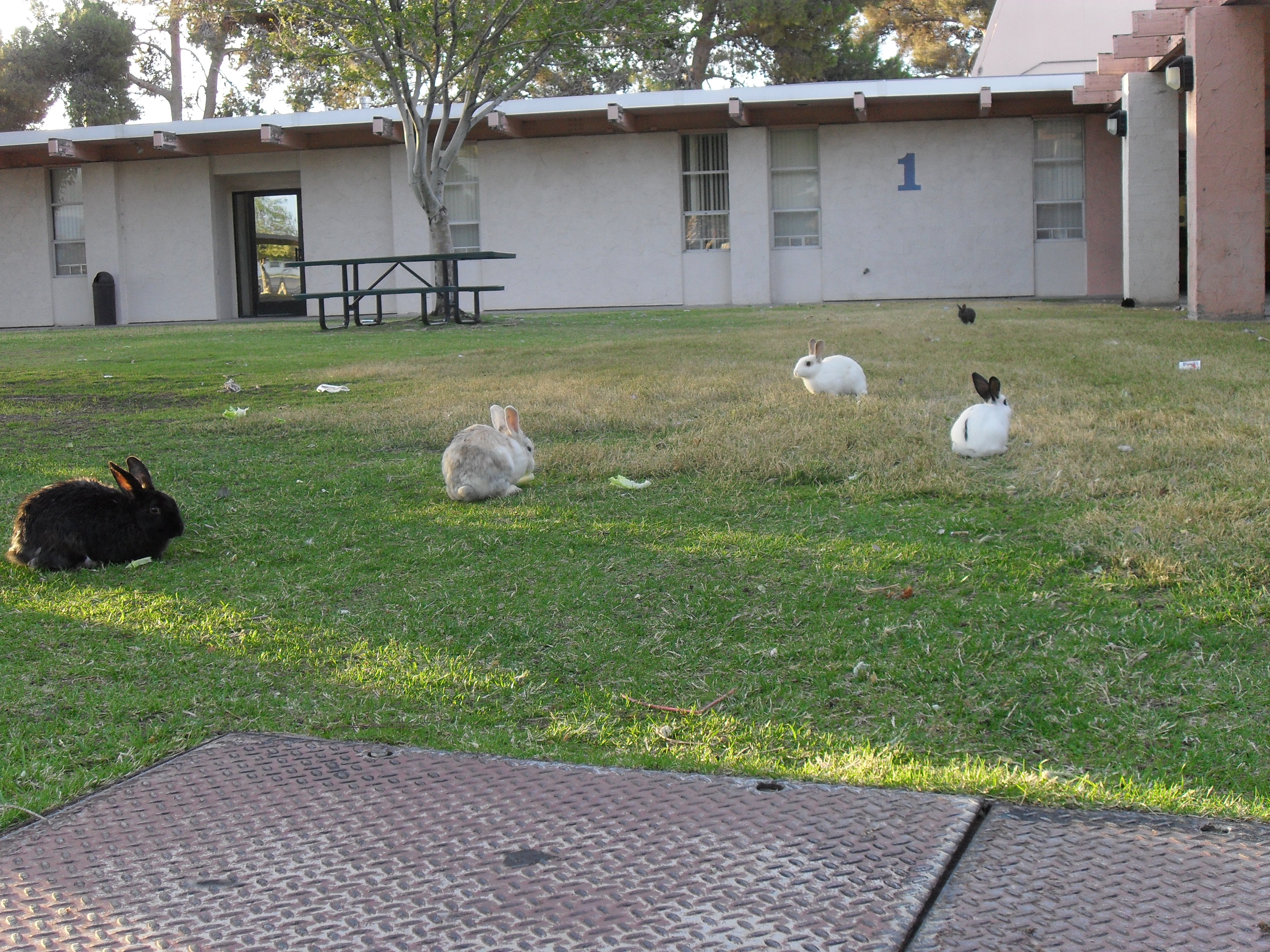 (This # includes babies that were born after rescuing the females too) 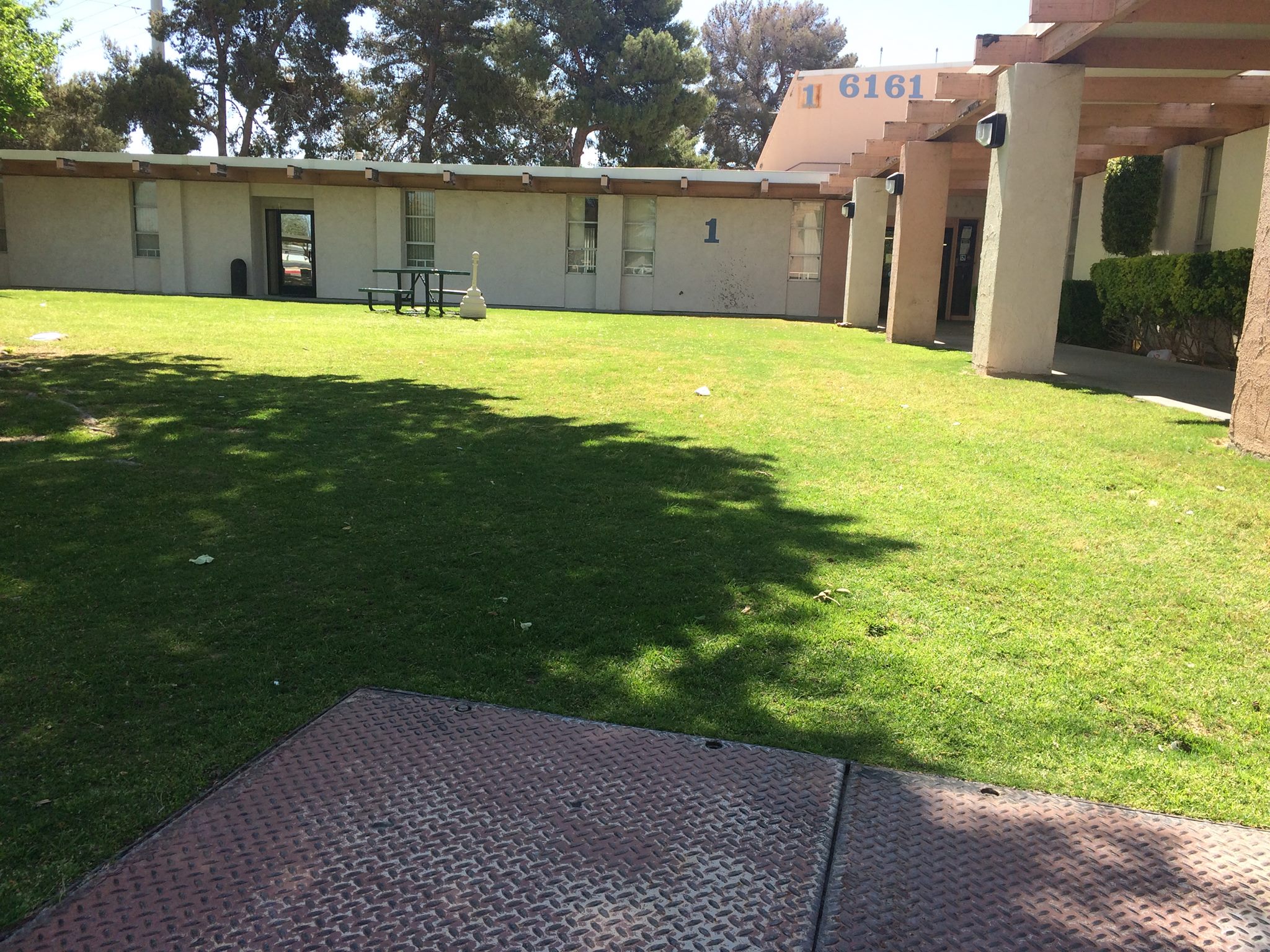 WHILE ALL THE CAPTURING IS DONE, THE CARE AND REHOMING CONTINUES.

UNFORTUNATELY, THIS MADE FLOYD LAMB PARK IN THE CITY OF LAS VEGAS THE LARGEST BUNNY DUMPSITE IN TOWN.  AS OF OCTOBER OF 2019, OUR “BUNNIES MATTER RESCUE” GROUP CAPTURED EVERY DOMESTIC BUNNY ON PROPERTY AND IS CURRENTLY HOLDING ADOPTION EVENTS AT FLOYD LAMB PARK EVERY SATURDAY FROM 10 AM – 3 PM.

AS OF MARCH OF 2021, WE HAVE RESCUED ALL THE DUMPED BUNNIES AT FLOYD LAMB PARK (CURRENT TOTAL IS 67) AND MOST OF THEM HAVE BEEN ADOPTED TO GREAT HOMES.  MICHELE FIORE AND THE PARKS DIVISION ARE CURRENTLY WORKING WITH OUR GROUP TO HELP US SAVE OTHER BUNNIES THAT HAVE ALSO BEEN DUMPED IN AND AROUND THE CITY OF LAS VEGAS.  WE HAVE RECENTLY APPLIED FOR 501(c)3 STATUS. 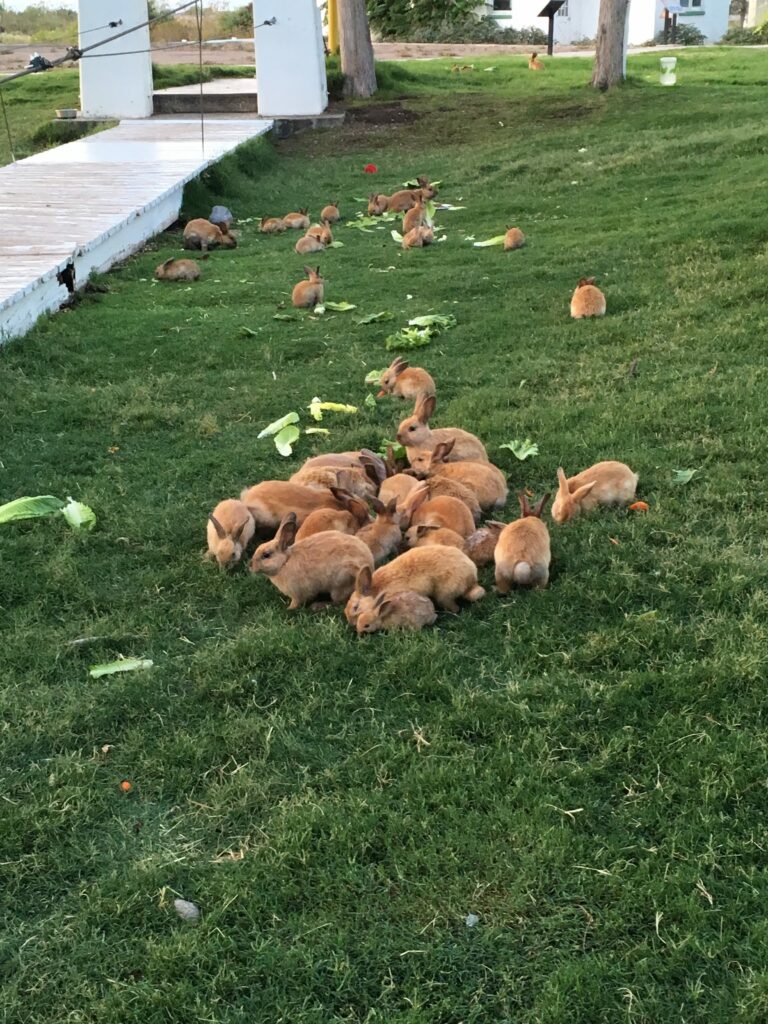 THERE IS STILL A LOT OF WORK TO DO IN LAS VEGAS AND FEEDING & CARING FOR HUNDREDS OF “DUMPED” BUNNIES IS VERY EXPENSIVE.  IF YOU CAN DONATE, PLEASE CLICK ON THE LINK BELOW! 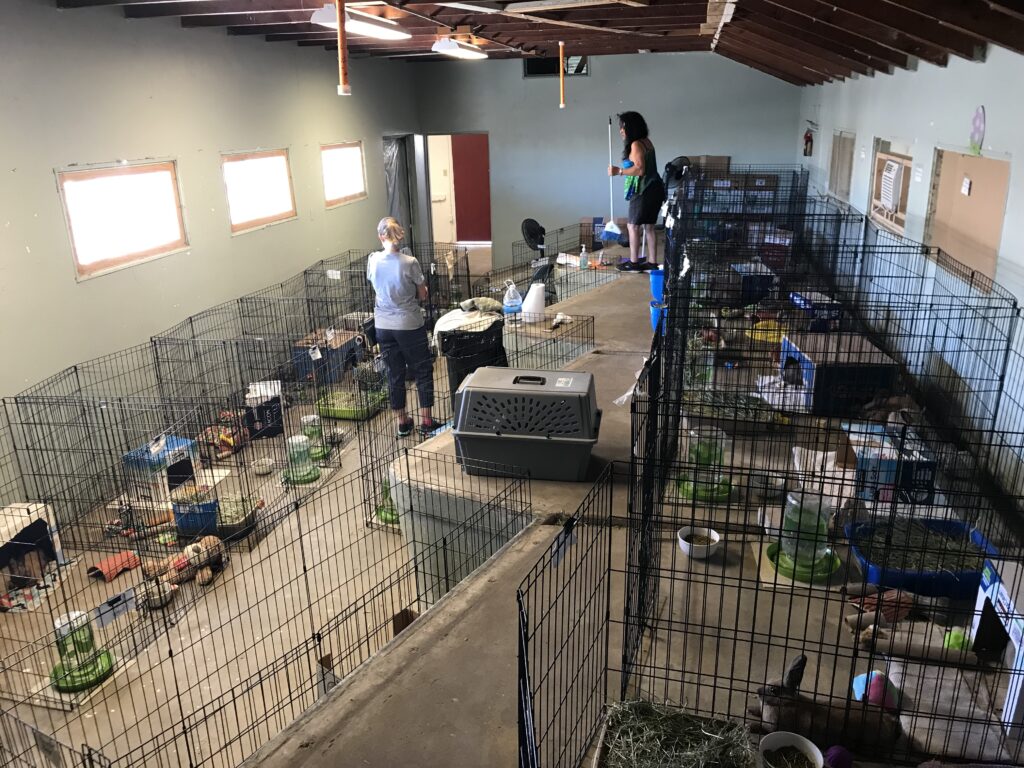 Jackie and Carri at the “Bunny House” at Floyd Lamb Park 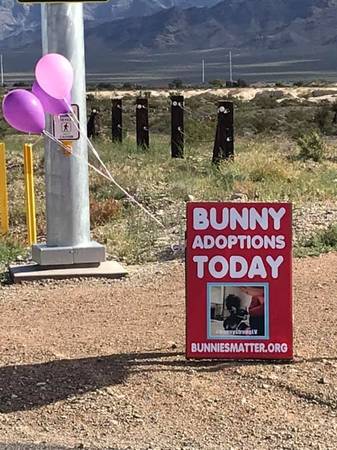 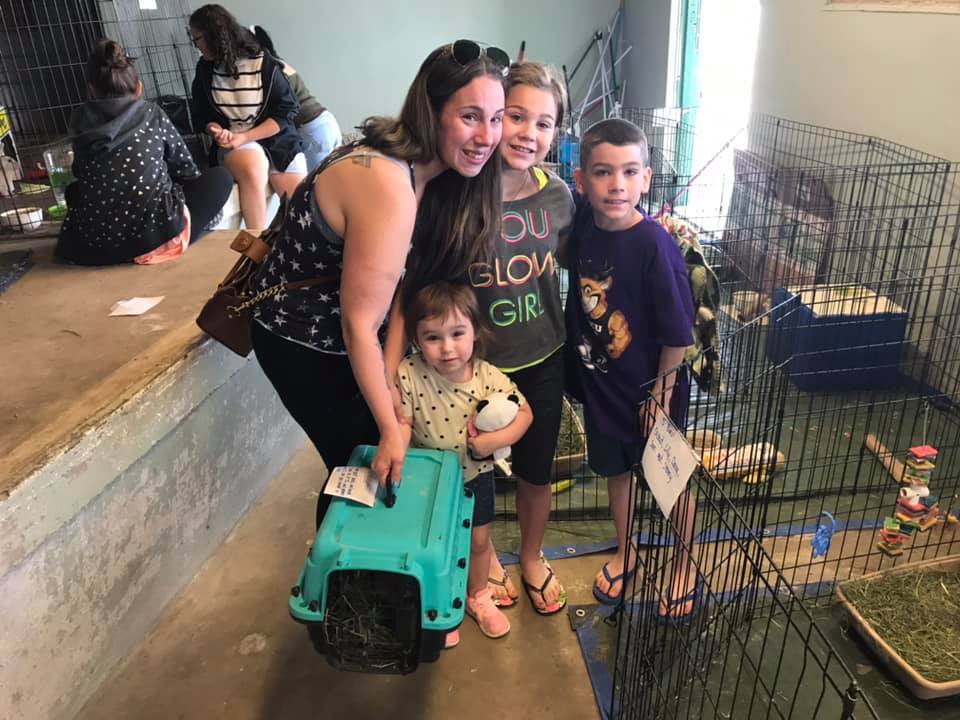 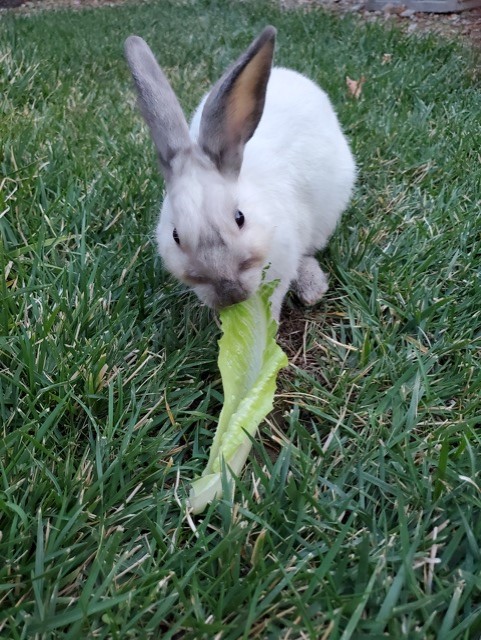 “PARKER” – DUMPED AND LEFT TO FEND ON HIS OWN 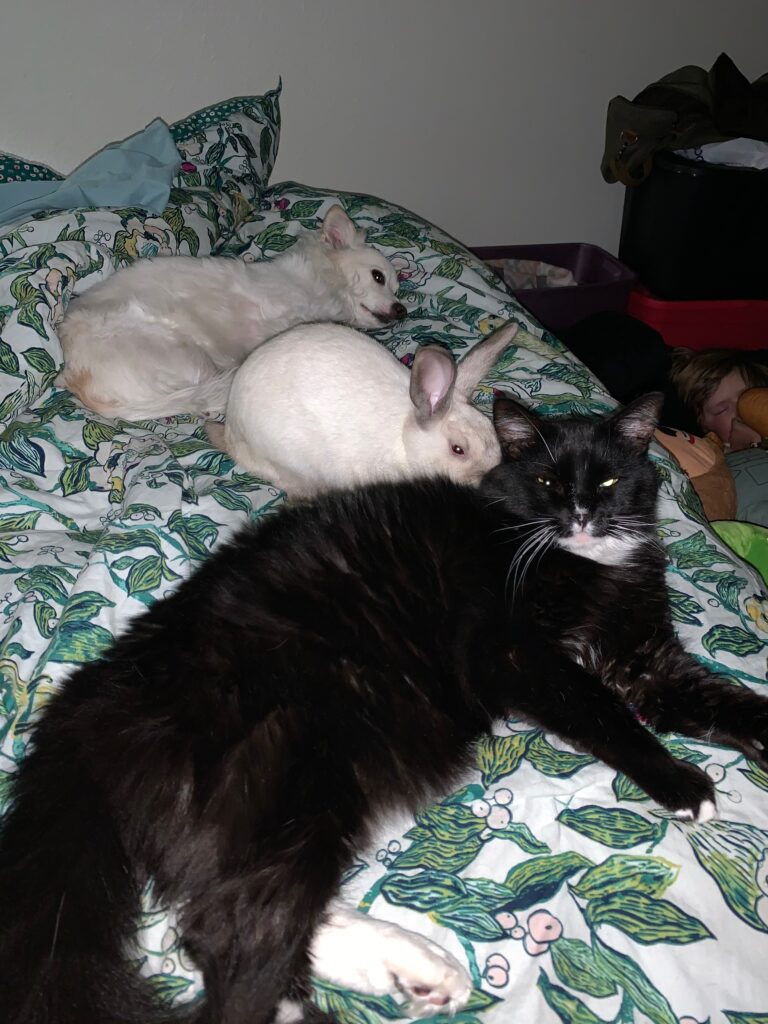 “PARKER” – LIVING AN AMAZING LIFE WITH HIS TWO NEW FRIENDS

Our “Original” story before all these bunnies were rescued:

There is a central location in Las Vegas where people have dumped their unwanted pet bunnies at a large State mental health facility because there are already hundreds of “wild” domestic bunnies running around at this site.  These bunny dumpers probably figure “Hey, what’s one more bunny there? They’ll be happy here!”  The problem with that is that bunnies are very territorial and if you haven’t ever seen bunnies fight, it is more brutal than you can imagine.  The new bunnies that are dumped here will be attacked by the other bunnies (Caution Graphic Post), suffer heatstroke, be hurt by other animals (coyotes and hawks) and/or run out in the street and get hit by cars because they are being chased.

There are also cruel people who maliciously try to hurt or kill the bunnies at the site as well.  The story that we’ve heard from a few different people is that around 2007, the State thought that it would be calming for their mental patients to have bunnies running around their huge, many acre facility, so they let several bunnies loose, not spayed or neutered of course.

Apparently, the State did not take into consideration that rabbits breed like rabbits.  Since the bunnies at this site have never been fixed, the 100’s of female bunnies can have between 4 and 12 babies EVERY 30 DAYS and their offspring can start reproducing at 3 to 4 months old. Obviously, it doesn’t take long for the bunny population to explode and areas to start having major bunny issues as they reproduce. The ONLY reason the population is somewhat under control here is that bunnies had been constantly dying from injury (being hit by cars), local predators including humans or purposely being killed by one of the State’s entities because they are destroying their landscape.  Please help by donating and/or volunteering so that we can help stop this bunny suffering from continuing.

The state of Nevada had contracted a rescue called V Sanctuary (Fall 2015) to “fix” the bunny issue but according to the owner, he was not given enough funds to solve the problem (200 bunnies at $40 each I was told on the phone with him).  In this Channel 13 news story on the Las Vegas bunny dump site, it states that V Sanctuary was actually paid $17,000 to try to fix this problem but whatever amount was spent, it was a complete waste of time and money. While initially the “rescue” effort got the bunny population smaller for a short period of time, since ALL the bunnies weren’t rescued and fixed, six months later (May 2016) the population was already out of control again. There is once again a huge population problem again and more bunny suffering is happening as there is usually little food or water. 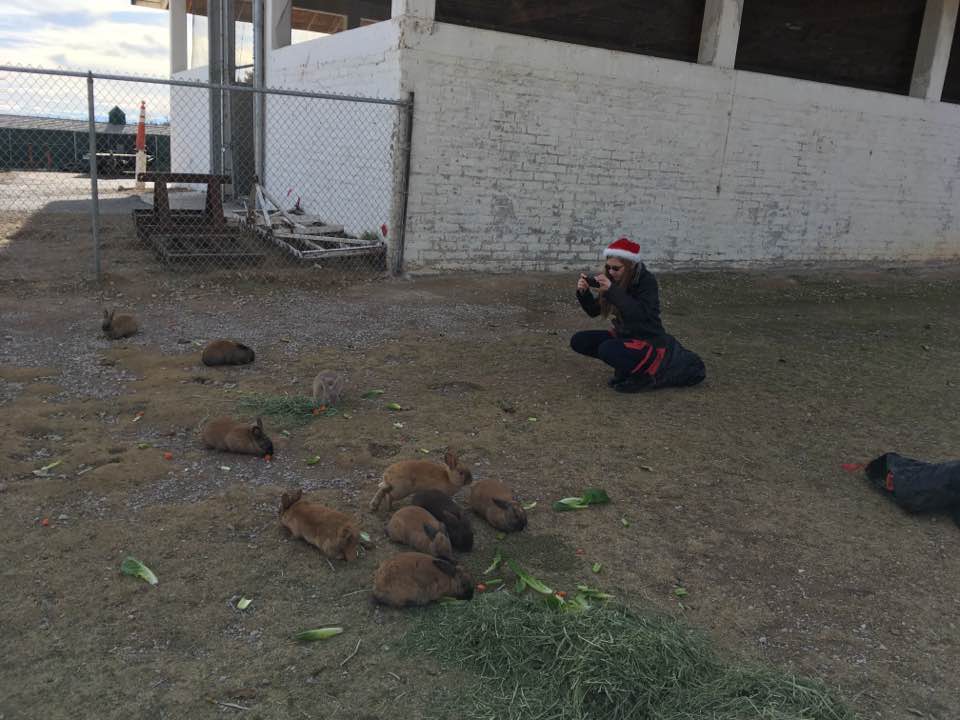 More dumping and bunny suffering. While there is better access to grass and water here at this City of Las Vegas park most of the year, the winter grass still turns brown and all the green plants and brush they hide in die, taking away their protection from prey. Coyotes and hawks get hungry and will come down and feed on them. Many do survive with the help of great bunny heroes like Lucy and Duncan who not only spend their own time and money to help water and feed them, but make these great fun videos to help bring awareness to this bunny disaster. 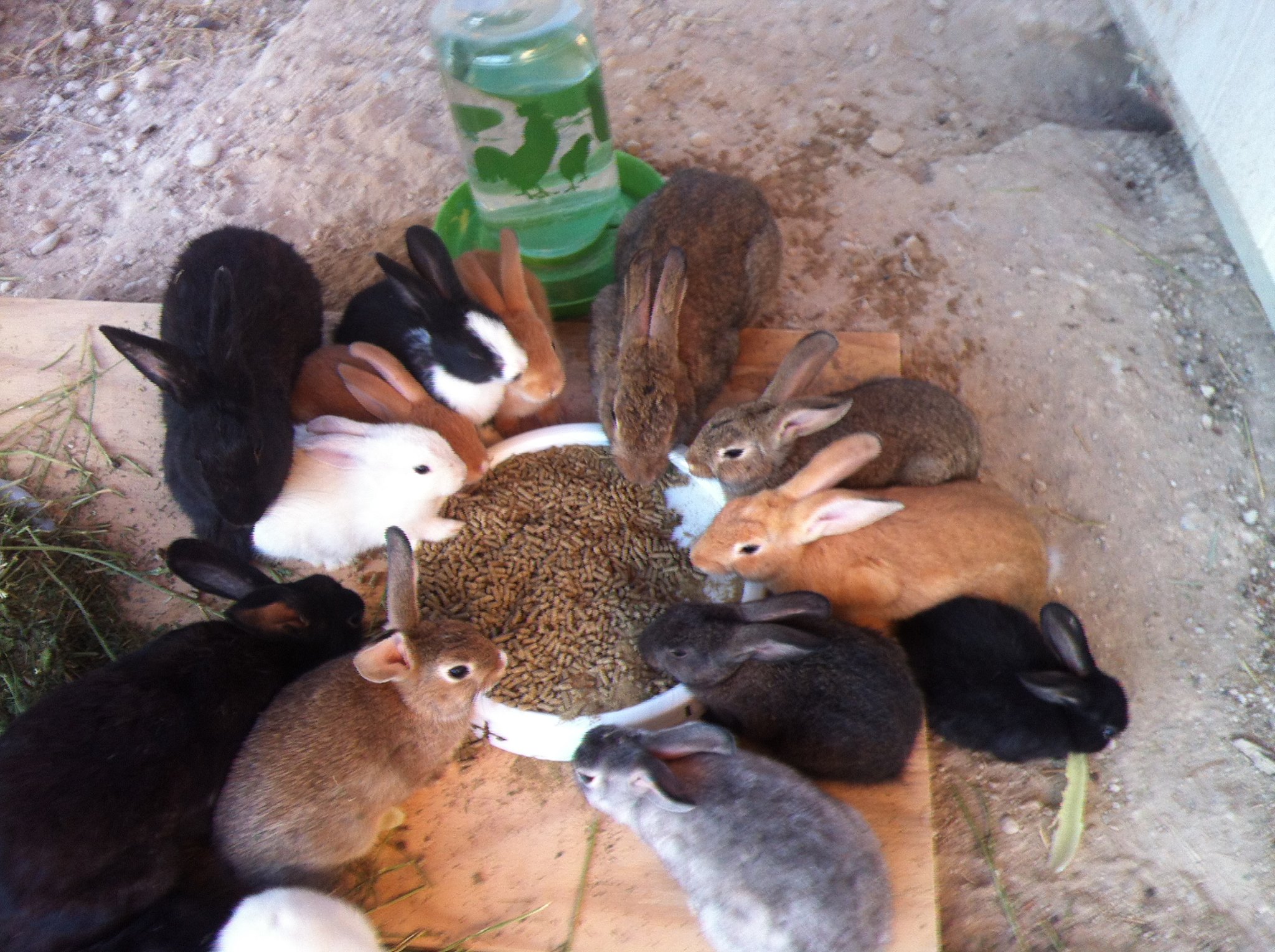 These were feral bunnies in an NW Las Vegas neighborhood that made a home under my family’s shed and began breeding which is how my daughters and I became aware that there are little resources for bunnies here in Las Vegas.  There are several neighborhoods in Las Vegas that dumped bunnies are breeding and struggling to survive. We personally have been trying to do our part in our neighborhood (Schweiger Family) and have done TNR (Trap Neuter Return) on our property to help stop the breeding in our neighborhood. Since spring 2015, some of the TNR bunnies have run away but some have been taken in and adopted most of them.  The last 5 survivors of my neighborhood rescue went to Lollypop Farm in New York using the Bunderground Railroad.  Unfortunately, there are many other parks and neighborhoods around town that we are aware of that are dumpsites for bunnies as well.

Condition of the Bunnies at the Various Las Vegas Dump Sites

During the spring and fall at the properties, there is some grass for the bunnies to eat and some water to drink from the sprinklers but the weather in Vegas is very brutal on these bunnies in the other 2 seasons and they do suffer without any outside help (and even with our outside help as they aren’t meant to survive in the extreme heat or cold ).  We have found parts of bunnies, dead bunnies and some “grassroots” bunny rescuers have even had to put a few bunnies to sleep because of the severely injured or possibly poisoned bunnies they have come across. (Warning – Graphic video of baby bunny Vegas PTS on April 17, 2016).  The bunny in this video was poisoned by a food deadly to bunnies but no one could prove who did the poisoning.  We currently help to rescue many of the dumpsite bunnies that our volunteers find in distress out on site but this is very expensive.  One of our favorite rescues (Matty/Lucky) cost our volunteer $1500 to vet her.

To donate directly to our Bunnies Matter vet at

15% Discount & Donation to Bunnies Matter in Vegas Too!

To donate bunny supplies or a bunny starter pack for our fosters, Click Here to for current “Small Pet Select” Bundles

VOLUNTEER & HELP BUNNIES BY SIGNING UP TO VOLUNTEER BELOW! 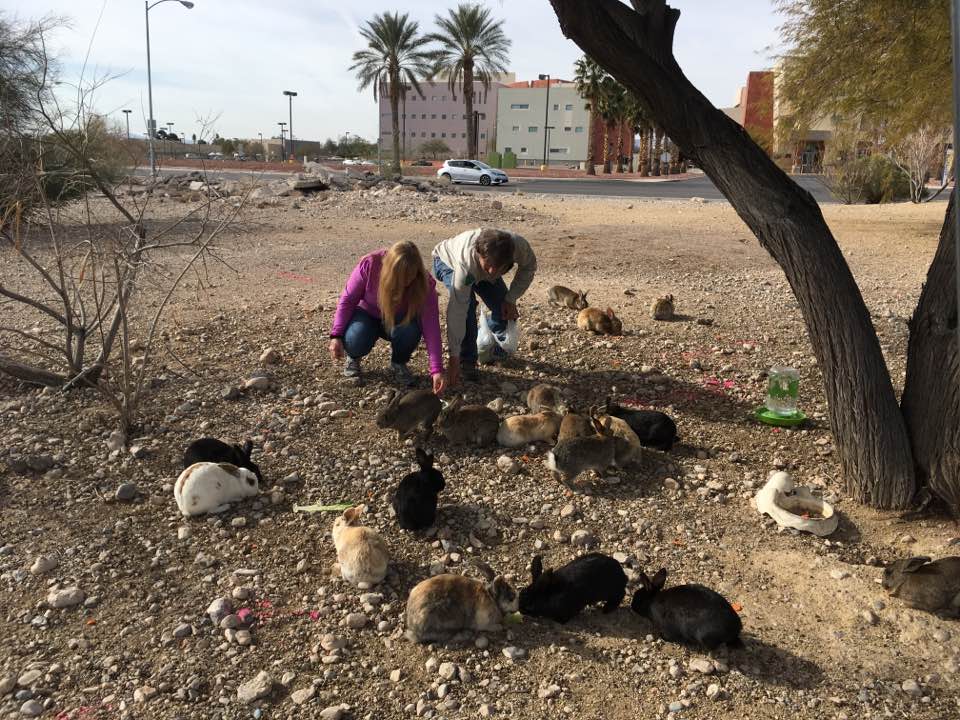